Posted at 13:04h in Articles by admincyk 0 Comments

There is a lot of conflicting information about Vitamin D on the web, here is what science rather than hearsay tells us.

What is vitamin D and why do we need it?

Vitamin D is a family of nutrients that act as a hormone that’s needed for calcium and phosphorous metabolism. These micronutrients are key for muscloskeletal (bone, muscle and teeth) health. Insufficient amounts of vitamin D can cause rickets in children and osteomalacia in adulthood as well as impairing immune system function, causing fatigue and increasing the risk of depression (1).

Where do we get it?

Vitamin D primarily comes from sun exposure as it’s synthesized in the skin when it’s exposed to sunlight containing sufficient ultraviolet B (UVB), but can also be found in certain foods, as well as in the form of dietary supplements.

Vitamin D in foods mainly comes in two chemical forms, vitamin D2 and vitamin D3. They both help to maintain a good vitamin D level but differ in a couple of ways.

Vitamin D3 mainly comes from animal sources and vitamin D2 comes mainly from plant sources. Vitamin D2 is cheaper, this is what most vitamin-fortified foods contain.

Vitamins D2 and D3 get absorbed similarly by the human body but get metabolised in the liver differently. Because of this the same amount of vitamin D3 yields more calciferol (the main form of vitamin D actively circulating in the blood), than vitamin D2. This is why research shows vitamin D3 supplementation is better at maintaining and raising blood levels of vitamin D (2).

A small terminology note, without a subscript, vitamin D refers to vitamin D2, D3 or both.

There are certain groups that are under increased risk of vitamin D deficiency:

What are the recommendations?

Scientific Advisory Committee on Nutrition / SACN published a new guideline for Vitamin D in 2016. The current recommended daily intake* is 10 micrograms/400 IU for everyone in the UK aged 4 and above. This recommendation includes pregnant and breastfeeding women.

These RNIs and safe intakes are developed to make sure that the majority of the UK population has enough vitamin D levels to protect bone, muscle and teeth health.

However, you should bear in mind that preventing disease due to deficiency and optimal health are not the same, so when it comes to RNIs, we are talking about bare essentials.

Something else to consider is that these recommendations do account for the amount of sunlight the person is exposed to, which varies not just by season, but also due to time of day, altitude, cloud cover, sunscreen and even clothing. 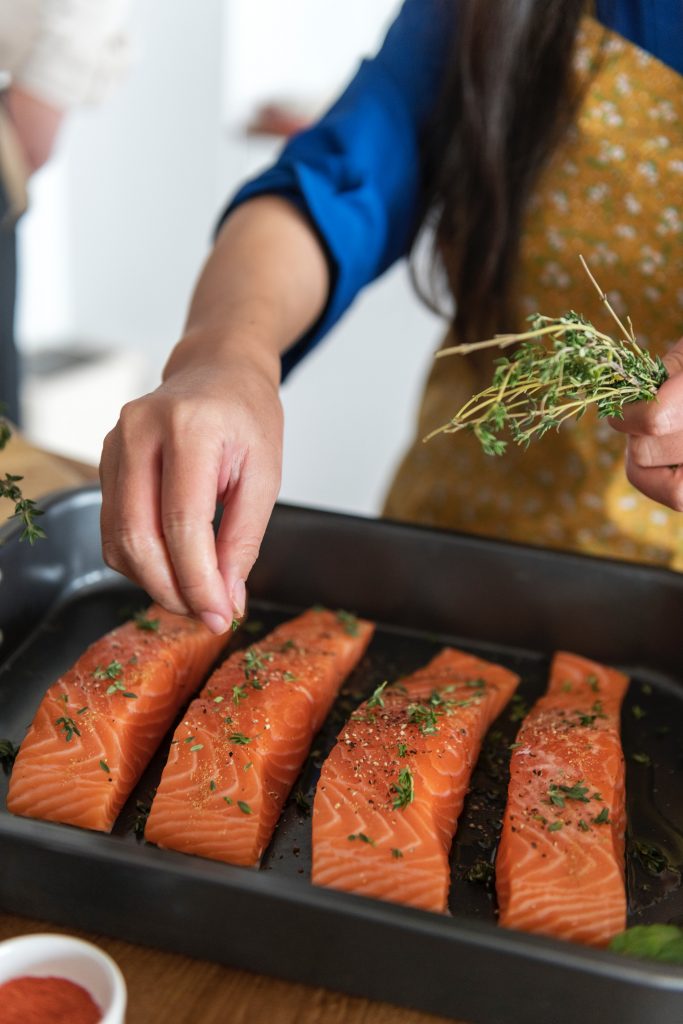 It’s possible to get all the vitamin D you require from food, here is what that would look like.

Examples of foods that give the daily minimum intake of 10 micrograms / 400 IU of vitamin D per day:

However, as you might imagine, it can be difficult to keep up a sufficient intake of these foods every day for months at a time.

So, do I need to supplement?

Probably, especially over the autumn and winter months.

For supplementation, it is better to supplement with vitamin D3 rather than vitamin D2 for the previously mentioned reasons.

Once again it is useful to keep in mind that these guidelines are set to prevent diseases caused by vitamin D deficiencies, not for the optimal health of an individual.

If you currently have a vitamin D deficiency, a supplement containing a higher dose of vitamin D can be useful. The safe upper intake for vitamin d is 100 micrograms / 4000 IU per day (6). Vitamin D can be toxic at high levels, so if you are not sure about whether you have vitamin D deficiency or not, and you are thinking about supplementing for more that 10 micrograms per day, it would be a good idea to talk to your GP and get your blood levels tested before starting supplementing with a higher dose.